If there was a world record for the greatest number of hours spent in brand new recliners, I think hubby and I would be in contention for breaking it. Since the chairs have shown up, that's where you'll find us. But spending hour after hour in the chairs have limited the pictures available for today.

I could have taken a picture of the geese flying over the river. Except the hunters are out and I would be afraid of capturing the very moment a goose started plummeting to the ground.

I could have taken a picture of us lounging in our chairs. Except our eyes were closed more than they were open.

So I took a picture of hubby's fireplace. Except it's not a fireplace.

He wishes we had one so he could sit in his new chair by a warm crackling fire, but we don't have a fireplace anywhere in the house. He found the next best thing - a candle. (Yeah, I don't get it either, but whatever...) I won't be surprised if he winds up using this picture on cold days as a backdrop on his computer screen! 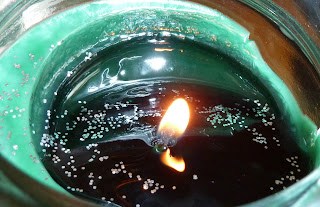