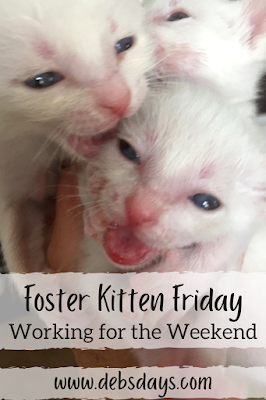 I'm not sure who worked harder this week and needs a break more. Me? My Duck Tales? Guess I'll let you be the judge.

Monday was weigh in day. As these babes are little they get weighed quite frequently but Monday is the day that counts because it's the day their weights are submitted to Simply Cats. It's also the day my postal scale I use for all my Etsy shipping does double duty.

Side note: In the last couple months my Etsy shop has really taken off. My most popular items are the vaccination card holders - I've already sewn (and sold) 800 of them. (Go me!) The most popular fabric? The bright kitty cats, of course! 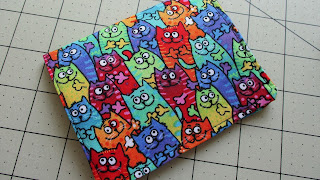 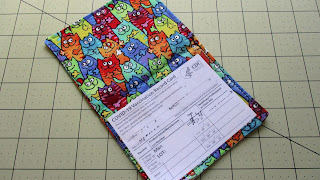 Tuesday is Tutorial Tuesday here at Deb's Days and Huey was a featured guest. This week we taught everyone how to make holders for plastic grocery bags. While Huey wasn't scheduled to have any speaking parts, he took it upon himself at the 49 second mark to make his noisy presence know.

Two of the little ducklings decided to reenact a prison escape. I partially cover their humble abode with a blanket so it's a bit darker for them during the day but somehow they climbed on top of the blanket and made their way out and about.

Not only did we have attempted escapees we had a couple over the wall, scampering about like cockroaches when you turn on a light. With the babies outgrowing their prison cell, on Thursday we moved them into a bigger and better joint - my favorite place to corral kitties - these popup pens. No more crawling out the top now!

Finally, TGIF! Mr. Huey, Dewey, and Louie have become active little ducks and are ready to explore a bit more space. I planned on putting them on the couch to scamper about (and get a kitty cat family photo), but I was a little concerned about something I saw on Mr. Dewey's little leg. After a trip back to Simply Cats, with the lights off and a black light shining on his back leg, the suspicions were confirmed. The green glow on the leg joint tells us he has ringworm.

Dang. Now this contagious fungus changes things. We need to think through what my schedule will look like. How to protect them, me, and my work. We need to do some rethinking about what foster kitty life is going to look like in this house.  And just like that, I've already learned a new phrase - foster home biosecurity.
Yeah, we definitely need a weekend.