I knew that when his appetite started coming back it was probably the steroids. Now that he's been on them a couple weeks now I know for sure.

He's a hungry guy. Most of today's conversations seemed to revolve around food - how he's starving right after he eats, what food he'd like to have and even a specific list of foods to ask the dietician about. Then when it came time for him to go to dinner and me to leave for a bit (only patients and nurses are allowed in the dining room) I asked for his input on where I should go. He named off restaurant after restaurant. I followed one of his suggestions. The Ram.

Good choice. Not only did they have garlic fries but they had something called "ice cream cupcakes". Oh my! As tasty as everything was, I'm hoping I'm getting close to the end of the What I Ate When I Left the Hospital book. 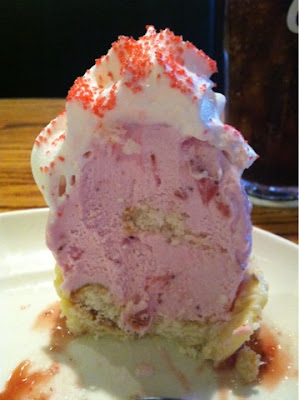 I did put the car issue to rest. A morning spent at the dealership was time well spent. An oil change didn't find the rattling, but when they removed the tires for rotation they discovered a large rock in my brakes. Problem solved. If I hadn't solved it myself Gini had offered to pick me up - even pick up my car - to help me out. Thanks, Gini!