It's been 23 years exactly.

23 years since our one and only child was born. It wasn't meant to be that way. We planned on having several kids, but things don't always work out as planned.

We tried for many years and wound up with nothing but two ectopic pregnancies that never made it past the first couple months. Then any chance to have more kids ended when I had to have a hysterectomy when I was 30. We briefly considered adoption, but my husband nixed that quickly. He had seen plenty of students in his high school classes who were adopted, struggling to find who they were and where they came from, that he had absolutely no interest in being part of that heartache.

So our one girl was all we would ever have. There's a perception that only children are spoiled. In one respect, that is true. But we learned early not to spoil her with "stuff". We never bought her a car, a cell phone, an ipod, or a computer. We spoiled her with experiences and opportunities. Museums, camps, trips and travel. Before she went to college, we had made sure she'd visited all 50 states. She's been on two cruises. She's driven on the beaches of Texas, swam in the Pacific and Atlantic Oceans and the Gulf of Mexico. She's played in volleyball tournaments around Idaho, Utah, and Nevada. She's snorkeled in the waters of Alaska and hiked a volcano in Hawaii.

At 23 it's getting to the point where she'll start paying for her own experiences and opportunities. What we will continue to do, though, is make her feel special on her birthday. Special with a few presents, a good homemade barbecue dinner of her choosing (steak, grilled onions, garlic bread, and asparagus, baked potatoes, and salad). Special with a cake decorated by her mommer (me).

I didn't spend the amount of time I should in decorating it, but it'll do for the three of us. I'm taking what my horoscope said today to heart. "Don't beat yourself up for not being perfect!"

And kiddo, remember that for yourself too. Happy Birthday! 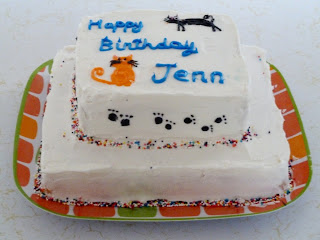 Exercise update: Today was 47 days in a row. I've been down with the flu all week so it's been difficult to exercise every day, but I did it. I cut back on the amount of time I usually bike, so the total biked this week was only a little over 15 miles.