Over the years there has been one important requirement in my life - to make a contribution to society. For 20+ years it occurred through my work in the public school system. Since I'm no longer - and probably won't ever be again - employed in the school system, I keep working with my number two contribution-to-society activity. Sewing for charity.

Something I've done for years, my sewing for charity has continued despite some pretty bad times. I still plug along on it, just quite a bit slower than in the past. I almost always have a project I'm working on and right now I'm on one that has taken me several months to complete. Thanks to Paul Newman.

Did you know it was his birthday yesterday? He would have been 92. He was the co-founder of The Painted Turtle, a camp for kids with serious medical issues. I've worked with this charity before, sewing turtle pillows for campers. This tim around 've been working on more turtle pillows as well as bed quilts. I'm finally nearing the end of the how-did-I-get-myself-into-this? project.

One of my brighter quilts is a quilt-as-you-go project. You'd think as long as I've been quilting I would have tried out the technique before but not until now. A new and yet different small contribution to society.

(To clarify... it's not technically Paul Newman's fault it is taking me several months to finish this project,  It's my fault - my hands' and shoulders' and back's fault - that I'm taking so long. But it is because of him I do have this project to work on!) 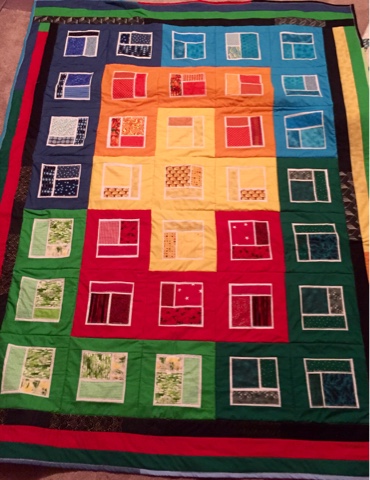